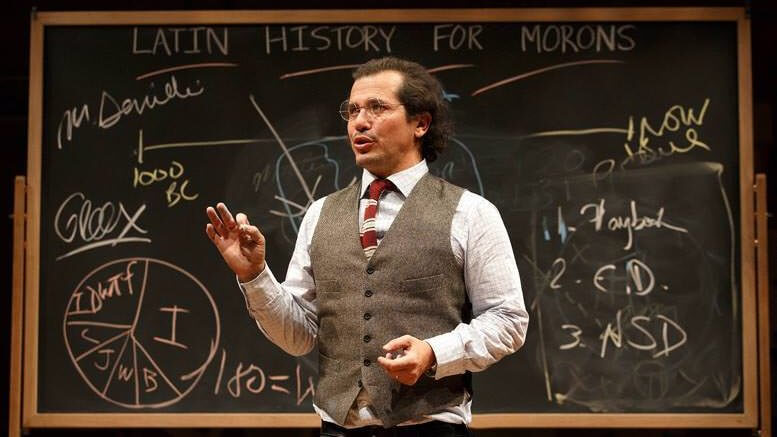 Emmy winner John Leguizamo is headed back to Broadway with his latest one-man show, Latin History for Morons, following its run at the Public Theater and Berkeley Repertory Theater.

Producers Nelle Nugent and Kenneth Teaton said performances will begin Thursday, Oct. 19, with an official opening on Wednesday, Nov. 15 and a run through Sunday, Feb. 4, 2018 at Broadway’s Studio 54 at 254 West 54th Street.

Tony Taccone is directing, following his work on Wishful Drinking and  Bridge & Tunnel. Leguizamo wrote and stars in the show with scenic design by Rachel Hauck, lighting design by Alexander V. Nichols and original music and sound design by Bray Poor.

While The Book of Mormon regales audiences with its version of Mormon history and Hamilton gives its take on history, Leguizamo presents his own views of Latinos in the Americas in what the production calls an “outrageously funny, satirical one-man play about uncovering the truth, and recovering from the past.”

The New York Times’ Ben Brantley called the show “funny and surprisingly poignant,” mixing one liners with observation that is “startlingly touching.”

Anyone who thinks they’re getting a history lesson in Hamilton will find a very different, if humorous view of Hispanic history, in Leguizamo’s latest one-man show.

He in this show embarks on a search for Latino heroes after finding there are virtual no Latino figures in his son’s American history class.

The result is what the show calls a “mad recap of the Aztec empire to stories of unknown Latin patriots of the Revolutionary War and beyond.”

John Leguizamo gives a humorous view of 3,000 years between the Mayans and Ricky Ricardo in the 95-minute show and the latest monologue from the creator of such shows as Mambo Mouth, Ghetto Klown and Freak.

In addition to his Broadway show, audiences also will be able to see him in The Adventures of Drunky, set for release this year; ABC’s TV movie drama Salamander; Nancy, opposite Andrea Riseborough, Steve Buscemi and Ann Dowd; and Waco, a six-part event series set for release in 2018.