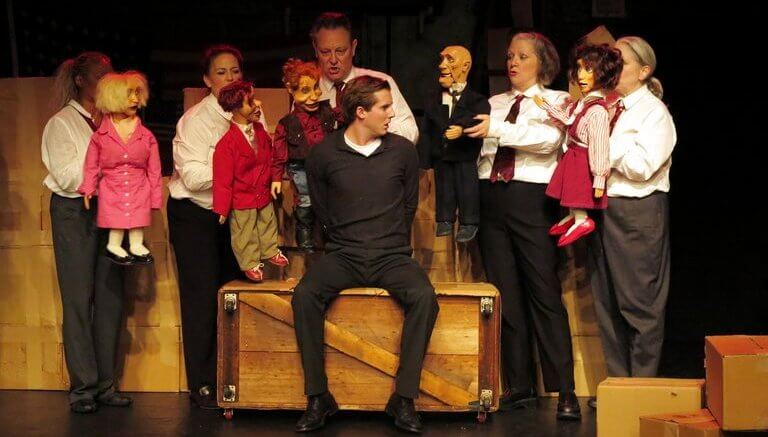 To those who believe Lee Harvey Oswald may have been a puppet while others pulled the strings, the Czechoslovak-American Marionette Theatre’s “The Life and Times of Lee Harvey Oswald” may offer both literal and metaphorical truth.

The show, which runs Nov. 2-19 at La Mama E.T.C., Fourth Street (Bowery and 2nd Ave.), is being presented by La MaMa and GOH Productions along with the Czechoslovak-American Marionette Theatre, a resident company at La MaMa and Theatre Kapow of New Hampshire.

Performances are Thursdays through Saturdays at 7:30 p.m. and Sundays at 3 p.m. for $20 general admission and $15 students and seniors.

Ten $10 tickets plus a $1 fee also will be available to every performance on a first-come, first-served basis (advance sale recommended. The box office is (646) 430-5374, www.lamama.org

The show looks at three 1960s national traumas and dramas that the producers say are “shrouded in dense cobwebs of multiple conspiracy theories.”

Those include the assassinations of President John Fitzgerald Kennedy, Robert Kennedy and Rev. Martin Luther King.

Writer/director Vít Horejš presents the main protagonists as “a peculiar cross between Greek tragic figures and stock characters from traditional puppet murder mysteries,” according to the group.

John Fitzgerald and Robert Kennedy and Martin Luther King, all portrayed by puppets, are dramatized as their lives are literally guided while others pull their strings.

The production also includes a chorus of cheerleaders, FBI, KGB and talent agents who warn them in vain to avoid the path of destruction.

The chorus includes a dozen frightening dummies created by Václav Krcál that the producers say is “reminiscent of the scary characters in the Pantheon of American Ventriloquism.”

In addition to its work at La MaMa,  seven of the group’s productions, mixing politics and puppetry as well as history, heart and some humor, have been presented at Theater for the New City.

Those include “The Very Sad Story of Ethel & Julius, Lovers and Spyes  and about Their Untymelie End while Sitting in a Small Room at the Correctional Facility in Ossining New York.

That show, presented in 2008, explored the Rosenberg trial with both puppets and a manipulated set.