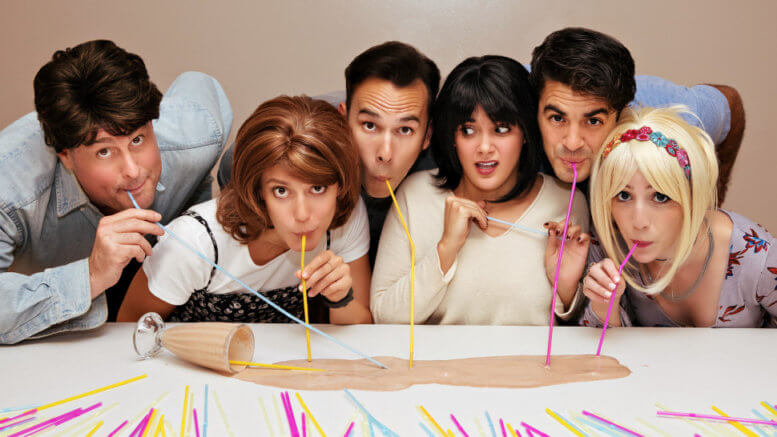 Friends the Musical Parody, based on but not authorized by the TV show, has opened and is receiving an extended Manhattan run as the latest TV show turned into a topic for theater.

Ross, Rachel, Chandler, Monica, Joey, Phoebe and Gunther or at least versions of these famous TV characters will “be there for you” at St. Luke’s Theatre, 308 W. 46th St., between 8th and 9th Aves.

Lynn Shore Entertainment, Theater Mogul and McSmith Family Entertainment are producing the show, developed by the creators of Bayside! The Saved by the Bell Musical and 90210! The Musical.

Previews began on Oct. 13 at St Luke’s Theatre for the show that and opened on November 2 originally slated for a limited run through December 31, 2017.

The show has now been extended with a run to resume on Jan. 3 and continue through March 31, 2018.

The show, according to the production, seeks to celebrate and poke fun “at the wacky misadventures of a group of 20-something pals as they navigate the pitfalls of work, life and love in 1990s Manhattan.”

“It’s a seemingly typical day at New York’s only coffee shop, Central Perk, until an unexpected runaway bride with beautiful hair enters the picture and kicks the whole gang out of second gear,” according to the show.

The musical is the latest TV0themed creation of Bob and Tobly McSmith, who created musical parodies including Bayside! The Saved by the Bell Musical, 90210! The Musical, Full House! The Musical starring

It is directed by Paul Stancato (Jekyll & Hyde, The Lion King), music by Assaf Gleizner (90210! The Musical),  Perez Hilton, Showgirls! The Musical and Katdashians! The Musical!and musical direction by Kristen Rosenfeld.

The six-person cast includes performers who have appeared in other TV-themed musicals by this production team.