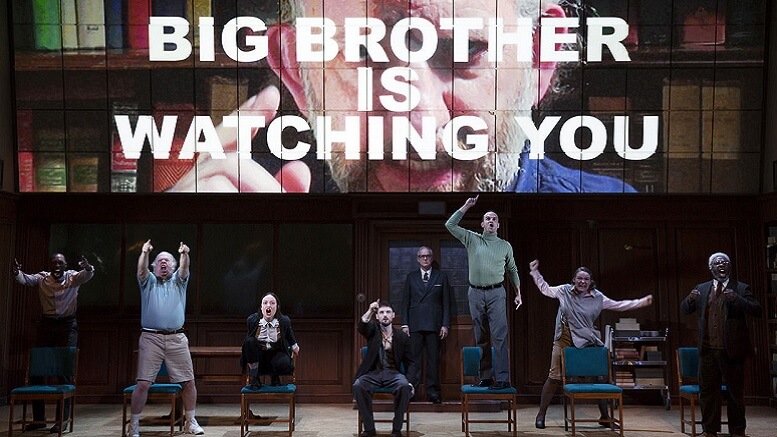 Big Brother may be watching, but it looks like little brother may have to stay home for the Broadway debut of George Orwell’s 1984.

There may be no rating system for musicals along the lines of movies, but in a move that has shades of Big Brother, Broadway is getting its first PG musical.

Producers Sonia Friedman and Scott Rudin said they are setting age restrictions for the Broadway premiere of the new stage adaptation of Orwell’s classic dystopian novel 1984. Orwell may no longer be with us but he remains one of the world’s most eminent authors and his work certainly doesn’t need much in the way of publicity, but having a stage production based on your work is a great method for marketing your book – and an age restriction controversy can’t hurt with generating a buzz either!

“No theatergoers born after 2004 will be admitted to 1984,” according to a statement issued by the production that could mean some littler brothers won’t be able to see the show.

Audience members must be age 13 years or older to enter the Hudson Theatre, going one step further than PG-13 for movies, which cautions parents that material may be inappropriate for children under the age of 13.

“The age restriction policy is being implemented due to the intensity of the production,” according to the production, which is described as including “several scenes that are graphic in nature and have disturbed younger patrons.”

Orwell’s 1984 has sold more than 30 million copies worldwide, been translated into more than 65 languages, and is recommended for students from grades six to 12.

But if sixth graders, typically 12 years old, are old enough to read the book, they’re not going to be allowed to see the Broadway show.

Robert Icke and Duncan Macmillan adapted the novel into what the production calls a “chilling theatrical event” with the main characters played byTom Sturridge, Olivia Wilde and Reed Birney.

The show began its New York City run on May 18 and officially opened on June 22 at Broadway’s new Hudson Theatre, 139-141 West 44th Street, for an engagement through October 8..

This production was originally produced in the United Kingdom by Headlong, Nottingham Playhouse, and the Almeida Theatre, in London; as well as on the West End at The Playhouse Theatre London, produced by Sonia Friedman Productions and Eleanor Lloyd Productions.