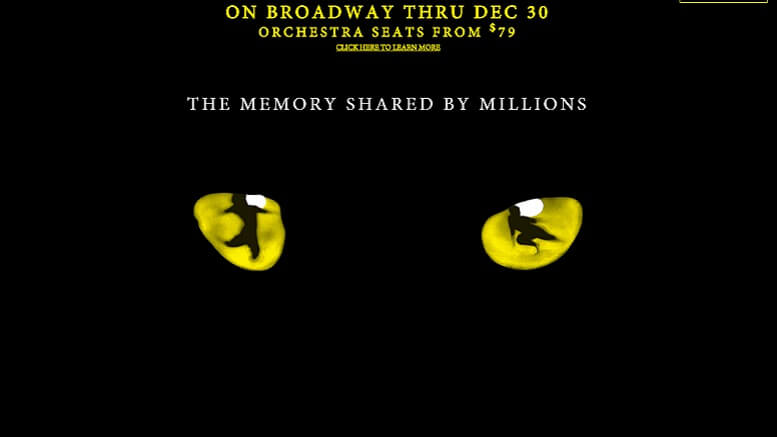 Curtains for Cats on Broadway? Final performance slated for Dec. 30.

Proving that even if diamonds are forever, singing, dancing felines are not, the revival of Cats will play its final Broadway performance at 8 p.m. on Saturday, December 30, 2017 at the Neil Simon Theatre at 250 W 52nd St.

Producers The Shubert Organization and The Nederlander Organization said the first Broadway revival of the show will close after 16 previews and 593 regular performances.

Preview performances of Cats began Thursday, July 14, 2016 followed by a Sunday, July 31, 2016 opening night, but the finish line is in sight for this Broadway run.

But true to its namesake, Cats will prove it has more than just two lives even after the curtain falls at the Neil Simon. The Cats National Tour is slated to open at the Providence Performing Arts Center in Providence, Rhode Island, in January 2019.

The tour is slated to travel to additional cities including Chicago, Durham and Los Angeles with the full schedule and other information to be announced shortly. So Cats may be coming to a theater near you, if you live in cities other than New York.

Cats was originally produced on Broadway by Cameron Mackintosh, The Really Useful Company Limited, David Geffen, and The Shubert Organization.

Cats first opened on Broadway at the Winger Garden Theatre on October 7, 1982 and ran 7,485 performances or nearly 18 years.

The venue was actually gutted to better suit the production only to be restored to its earlier appearance by architect Francesca Russo after the initial run closed.

The musical has been presented in more than 30 countries, translated into 15 languages and been seen by more than 73 million people worldwide.