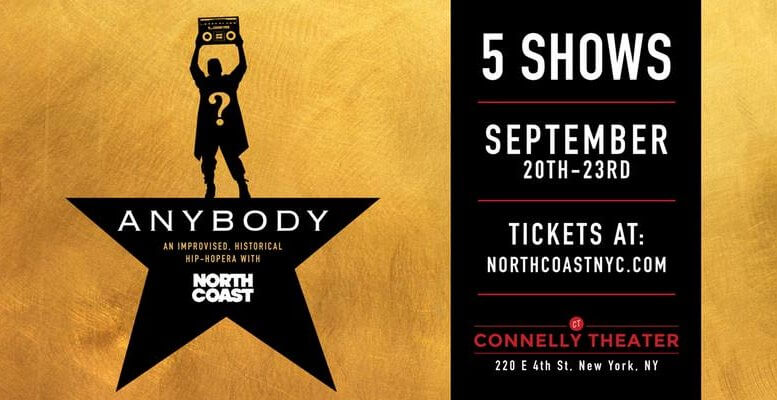 First there was Hamilton the hip-hop musical. Then there was Spamilton, the hip-hop parody. After that, Shamilton, an improvised musical focusing on different historical figures, came along. Now New York City is getting its own show at least inspired by Hamilton.

In the wake of Spamilton and Shamilton, get ready for a new hip-hop musical created every night in New York around a different historical figure in a sign that Hamilton is spawning a whole new industry comprised of musical parodies.

Unlike Lin-Manuel Miranda’s Tony award winning hip hop show, the audience helps write this show, titled ANYBODY, which is improvised for each performance around a different historic figure. That’s similar to Shamilton, which ran in Chicago and Los Angeles.

ANYBODY: An Improvised Historical Hip-Hopera, created by improv group, North Coast, will play at the Connelly Theater in the East Village starting September 20 with five performances through September 23.

ANYBODY, directed by Jody Shelton,  takes an audience suggestion of any historical figure to create a full-length improvised hip-opera.

It already has done shows centering around Nikola Tesla, Frederick Douglass, and Louisa May Alcott, mixing what the group calls “improvised beats, rhymes, and story line.”

Since their inception in 2009, North Coast has performed in New York City and nationwide at comedy theater and festivals as diverse as the Iceland Improv Festival, Hoopla and C3Something in London, as well as comedy festivals in Canada.

North Coast for the past three years has performed at the Peoples Improv Theater in New York City every Saturday night.

The company was named one of the “Top Ten Best Comedy Shows” by Time Out New York, and has been featured on Vh1, in Slate’s Podcast The Gist, The Village Voice, and The New York Times.

Performances for ANYBODY are at the Connelly Theater, 220 East 4th Street (between avenue A & B), in Manhattan. Tickets are available for $30 by clicking on the Tix. link.

Baby Wants Candy, another improv group, earlier presented Shamilton, which the group described as “an epic musical on the spot based on a historical figure of your choosing” in Chicago and Los Angeles.