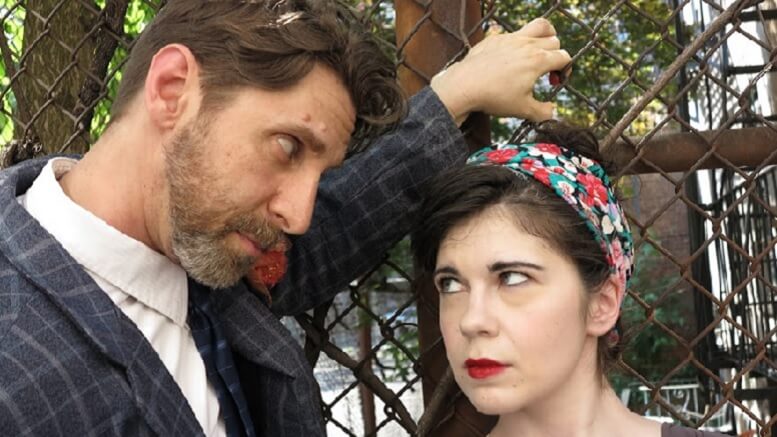 Anwen Darcy and Michael Bernstein appear in the Shakespeare in the Parking Lot production of All's Well that Ends Well presented by The Drilling Company,July 6 to 22, directed by Karla Hendrick. Photo by Jonathan Slaff

They may have paved over paradise to build a parking lot in a song, but they’re about to turn a precious parking lot into a stage for Shakespeare.

The Drilling Company is presenting a  Shakespeare in the Parking Lot production of All’s Well that Ends Well July 6 to 22 directed by Karla Hendrick.

Shows are free July 6 to 22 at La Plaza @ The Clemente Parking Lot, 114 Norfolk Street on the east side of Norfolk St. between Delancey and Rivington Thursdays – Saturdays at 7:00 p.m.

The group also is the producer of Shakespeare plays in Bryant Park as part of its focus on al fresco productions and Shakespeare beyond traditional stage – and a second home that the Public Theater has found in Central Park.

Hendrick set the two-hour piece in southeastern France just before the fascist invasion of World War II, transforming the play in terms of time and place.

“This is to illuminate themes of the muting of women’s role and voice, the breakdown of patriarchal systems, and the fight against fascism,” according to the Drilling Company.

Shakespeare in the Parking Lot was started in 1995 by Expanded Arts under the artistic direction of Jennifer Spahr who retired in 2000.

The Ludlow Ten then formed under the direction of Leonard McKenzie before The Drilling Company began co-producing in 2001.

After McKenzie’s retirement in 2005, The Drilling Company continued the tradition of Shakespeare in the Parking Lot.

Once it in 2014 lost its parking lot to development when the Seward Park Urban Renewal Area gave way to mixed-used development, The Drilling Company found a new space adjacent to The Clemente, on Norfolk Street between Delancey and Rivington Streets.

“Like the previous location, it is a working parking lot and has the urban, gritty atmosphere that has made these productions memorable through the years,” according to the group.

After All’s Well That Ends Well’s run July 6 to 22, the group plans to present Henry the Sixth Part Three, directed by Hamilton Clancy, July 27 to August 12.