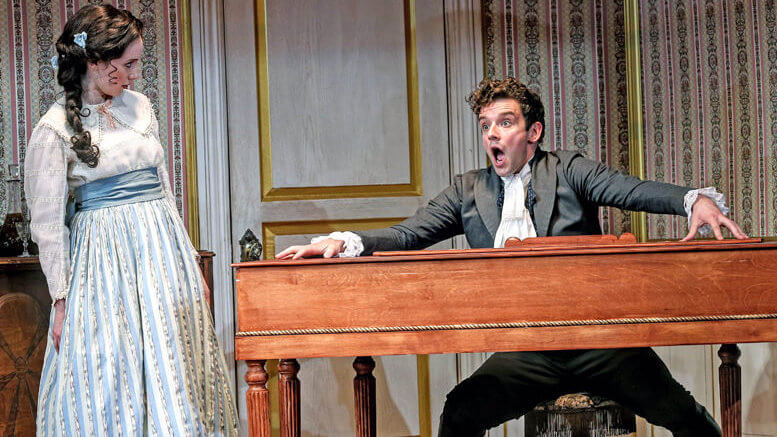 Following often rhapsodic reviews and receptive audiences, The Red Bull Theater’s production of The Government Inspector is moving from The Duke on 42nd St. to New World Stages for a six-week Off-Broadway run from July 6 to Aug. 20.

An adaptation of the play by Russian writer Nikolai Gogol, the show is a satire of small-town corruption that The New York Times’ Ben Brantley said “generates the kind of collective enthusiasm in its audience that you associate with home-team football games.”

“As this play’s misleading protagonist, Mr. Urie establishes himself as a bona fide leading man, in the tradition of great physical comedy performers like Kevin Kline,” Brantley wrote  of “a virtuosic cast led by a path-clearing cyclone of silliness.”

“When the crooked leadership of a provincial village discovers that an undercover inspector is coming to root out their commonplace corruption, the town weaves a web of bribery, lies and utter madness,” is the way the group describes the story.

Gogol’s play The Government Inspector, according to Red Bull, was brought to the attention of the Czar “who liked it so much that he requested the first theatrical production in 1836.”

After facing criticism from government officials, Gogol declared that ‘‘everyone is against me’’ and left Russia, according to the group.

He spent the next 12 years in self-imposed exile as one of Russia’s best known writers took refuge away from his homeland before finally returning.

Time Out New York has called Red Bull Theater “the city’s gutsiest classical theater.” A not-profit Off-Broadway theater company, it specializes in productions of classic stories from all eras and cultures.