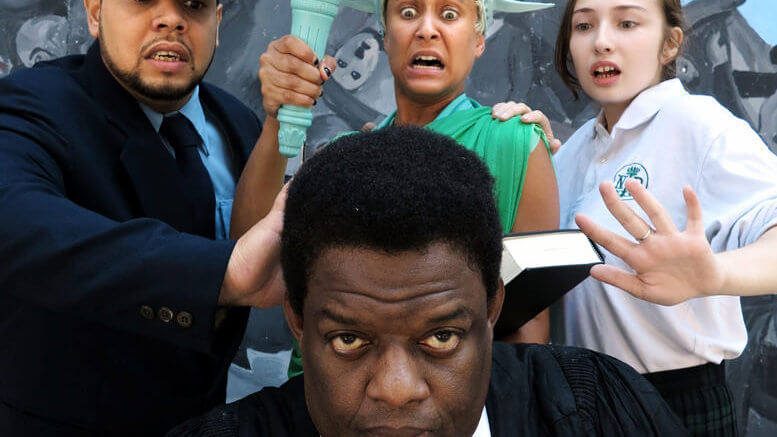 Theater for the New City is gearing up to present a tour of its summer street theater show that mixes spectacle, gigantic puppets and dozens of performers along with trap doors to be staged free at locations across New York City.

Playwright/director and TNC Artistic Director Crystal Field is presenting Checks and Balances or Bottoms Up!  a musical being performed by TNC’s Street Theater Company.

The show about a New York City student who becomes aware of and then takes on problems around her will tour New York City streets, parks and playgrounds in free performances throughout all five boroughs August 5 to September 17.

Field wrote the book and lyrics and Joseph A. Banks wrote the score for this show about a young New York City school girl who learns to fight against the “forces of tyranny, prejudice and hatred.”

Along the way, she takes audiences on a tour that ranges from song to slapstick to serious subject matter in the annual incarnation of TNC’s summer street theater program through which TNC has presented a new musical each year since 1976.

The family friendly show also includes a walking and dancing Statue of Liberty, immigrants from all over the world, a fake news ballet with women dressed in newsprint, a giant Statue of Liberty puppet and the Spirit of  Donald Trump apparition that rises above the stage as its two arms-envelope the stage.

The theater said the production will be staged with an “elaborate assemblage of trap doors, giant puppets, smoke machines, masks, original choreography and a 9 foot by 12 foot running screen” providing continuous movement behind the actors.

The show is being presented by Theater for the New City (www.theaterforthenewcity.net) free to the public. Audience info (212) 254-1109.

SCHEDULE (AS OF JUNE 29, SUBJECT TO CHANGE)