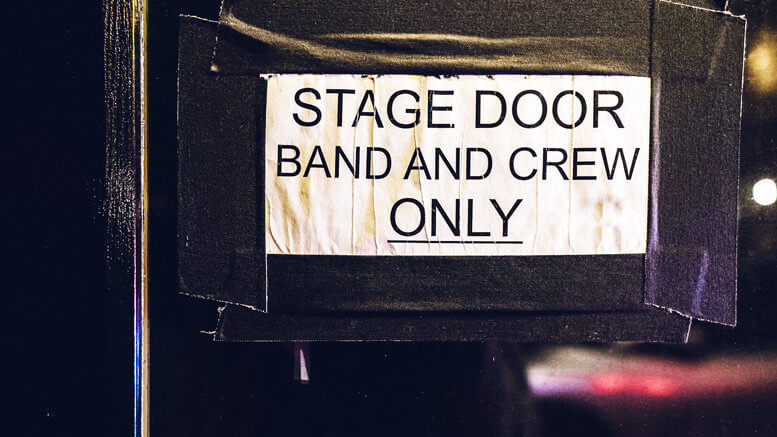 Backstage jobs are where behind-the-scenes crews work together to ensure the finest possible performance for the cast and audience alike. They’re the tech and crew behind it all. They are the unheralded workforce responsible for making the whole show run smoothly. And the potential for work outside the spotlight is plentiful and varied, especially in a center of theater such as New York.

“Finding stage management work was a lot easier than finding directing work, and one stage management job led to another backstage job. It was exciting times because as a stage manager I was working with amazing directors, playwrights, actors, designers, and I loved working in a New York theater, walking through the backstage door. ”

In addition to supporting the director in every necessary way, the stage manager also follows the rules and guidelines set up by Actors Equity Association. “Once the show opens and the director leaves, the stage manager is responsible for keeping the show where the director left it,” Fletcher says. This is done by giving notes to actors, rehearsing ­understudies and coordinating repairs of everything from sets to props to costumes to company morale.

“I kept busy doing some great off-Broadway work as well as regional theater—and ten years passed. And during this time, while stage managing and between jobs, I started playwriting.”

“Directing in the off-off Broadway arena is more difficult than any professional off-Broadway production I stage managed,” he says. “I have been extremely lucky to be able to go back and forth between stage managing, directing and play writing because it allows me time alone and time to work in an actual theater, which is always a joy no matter how off-off.”

As a director, Stephen Nachamie is well aware of successful collaborations. “The most rewarding thing is having your vision realized with a cast who support you,” he says. “During college, while working as an actor, I began assisting directors and choreographers on new musicals,” he says. “I took a short leave of absence from NYU to assistant direct and choreograph the Non-Equity National Tour of A Chorus Line. I was soon asked to choreograph and associate direct for stock and regional theaters, which led to directing my own productions.”

When directing, Nachamie strives to create an environment of mutual respect where the work doesn’t always overwhelm that sense of fun behind it all. “I want the actors to know that I am willing to join them “in the pool” versus being the distant lifeguard,” he says.

Having worked in the theater in several capacities, Nachamie is fully aware that there is no secret formula to success. “There really is no straight road to becoming a director; the experiences and offers come from all over,” he says. “As with performing, you must make sure it is what you want to do more than anything else. The profession is self-motivated and just as uncertain as acting.”

A key facet to a successful run is proper promotion and exposure of the show. “Most people say to me that they can do the self-promotion but they just don’t have the time and resources to also perform,” says Laurie Sheppard of Boom PR. “A performer should concentrate on their show and their craft and let a PR person do the grunt work of phone calls, faxing, and promotions.”

“Marketing is crucial, in this day and age, to the success of a show,” says Kymberly Harris, the Artistic Director of Fresh Bread Productions (www.bway.net/~fresh). Producers aren’t taking financial and creative risks because it costs so much money to produce a show—they cannot afford to lose. So, PR has been of utmost importance to the success of my productions.”

Sheppard says she gets the job done through assisting her clients by getting them listings and press about their shows; helping them to update or start a website, book interviews, get reviews, and general promotion.  “My purpose as a PR person is to get the people I work with attention in print, TV and radio,” says Sheppard. “I also help to find a good graphic artist to create postcards and posters, press kits and advertisers,” explains Sheppard. “I help generate interest, reviews and attention to producers so that she can take her show and get it produced to do a tour or a run in a theater.”

“[PR] not only brings in more audience, but it also lends to the legitimacy of a production in terms of getting reviewers there,” adds Harris. “And your chance of having a portfolio of your work to look back on is better with PR.”

As the Artistic Director of Fresh Bread Productions, Harris is an acting teacher with an MFA from the Actors Studio, who leverages public relations and marketing. “Producing is giving birth to an idea and an inspiration,” she says. “You go through many unsuspected changes with the help of professional people that you don’t know very well but need their expertise. In the end you come out with something that is, hopefully, not retarded or challenged or deformed, but something beautiful.”

“It’s getting so unbelievably expensive to produce theater yet artists are so grossly underpaid,” says Harris. “I go back to grass roots and simple sets in order to continue to produce. We can make great theater, pulling together to provide our skills, costumes, makeup, marketing, when necessary. I have had the pleasure of doing this many times with small budgets to great results. The important thing is not to stop.”

Harris has found that her collaborations as a producer have been effective and rewarding. “As I go on, I choose my peers more successfully, and hire people more carefully,” she says. “The only constant in getting on with each company is an attitude of gratitude that can get you out of any sticky situation. Otherwise, live and learn, and enjoy the process of it.”

Directing, producing, marketing, and public relations usually stay backstage, putting the show and its performers in the spotlight. But who’s responsible for the spotlight? The people controlling the lighting of a show are responsible for hitting their cues; much like an actor must, and enhancing the overall performance of theatrical experience in general. Without lighting’s ability to highlight an actor or shift subtly in reaction to mood, the entire event is drastically altered.

Prop Master Wendy Loomis was with the off-Broadway show I Love You, You’re Perfect, Now Change. Loomis, who started as a stage manager in college, likes the multi-tasking that an off-Broadway, non-union job requires. “We get there between 6:30 and 7 at night. We do our set-up the night before. During the show, I’m putting stuff on the turntable, pulling stuff off. Throughout the show, we re-set so that it’s ready to go the next time. By now, it’s second nature.”

Working in close quarters on a show that has four cast members necessitates much interaction with other departments. “If there is a costume piece that needs moving, we do that. I also have a couple of turntable cues. It’s a totally non-union way of looking at things, but it makes the process much easier.” she says.

Douglas Petitjean was Production Wardrobe Supervisor for The Producers, since before the Chicago run. “I would do a lot of fittings and talk with the costume designer to figure out his design concept to identify potential wardrobe problems. Now the show is up and running and I have twelve full-time dressers backstage who know all the dresser parts.”

How To Find Work Backstage

There are a variety of resources that you can use when seeking backstage theatrical work. Foremost is word-of-mouth, getting out there, networking and making contact. The seemingly most elusive job could become more attainable just by gathering some inside information from an acquaintance or friend. A second possibility is a search of the local periodicals, such as showusinessweekly.com and mandyslist.com, playbill.com and offstagejobs.com.

Thirdly, there is also the indispensable tool of the Internet. The Mayor’s Office of Film, Theatre & Broadcasting (www.nyc.gov/html/filmcom) is a reliable standby for listings and guides. Information found at www.newschool.edu/library/theatre.htm might prove valuable. Many of the links have production and design resources ranging from costumes to company.

Go From Backstage To Onstage

Films, television shows and theatrical productions provide plenty of employment opportunities backstage. Many struggling actors take these jobs while they pay their dues. Their reasons for this are varied. Some actors want to make contacts. Some want to learn any part of the business instead of waiting on tables or doing office work. And others simply love the production aspect of the performing arts.

The people who help put a production together are as indispensable as the actors on the stage. “Despite the frustrations that can come from doing theater at an off-off broadway level,” says Fletcher,  “there is absolutely nothing else I would rather be doing.”

Find a part for yourself in Show Business today. Membership is FREE! Join Here